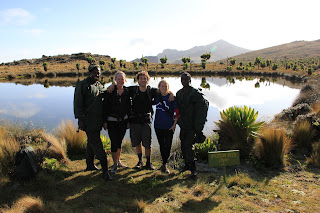 On Friday, September 14, four representatives from the Association met with a group from the Presidential Enterprise for Sustainable Tourism in Uganda (PRESTO Uganda) to discuss the possibility of working together in a partnership. The meeting was called by PRESTO to explain their vision and how the Association can help in pushing it forward.

The mid-morning meeting was attended by officials from the President’s Office and the National Planning Authority. A representative from the foreign affairs ministry also attended.

Mr Moses Dhazaala, a technocrat from NPA, explained the evolution of the body to the journalists. PRESTO has evolved from the 1992 Uganda Tourism master plan. For 10 years, there has been a document that the government has held with the intention of using it to transform the industry into a self-sustaining authority.

Mr Dhizaala showed the need for planners in the last few years to move things forward since, according to general consensus at NPA, red tape was slowing everything down.

Tourism has no sector general plan. It is the same with many other sectors of the Ugandan economy but it was particularly galling because of the evidence in recent times of tourism’s value to the country. While other sectors, like Education, get sacks of money that usually goes unaccounted for, Tourism suffers because those in charge of it either do not understand its potential or they are in the wrong job.

In February this year, President Museveni launched the initiative to act as an overseer. The different agencies that work closely with tourism-related activities are to be coordinated through the body.

That is where journalists come in. No matter how much resources are poured into an industry like tourism, if there is no visibility through constant coverage, Uganda will continue to lag behind other countries that are less endowed.

The Association was called upon by PRESTO to get deeply engaged in activities as they would fall, especially those the NPA team deems priority.
Already, missions abroad have welcomed the body. Various activities have been staged abroad through coordination of PRESTO. Ambassadors are driving a revolution where the smallest activity, like drinking coffee is as Ugandan as can be. Already, there is a presidential directive that only Ugandan coffee is to be served at the embassies.

The Foreign Affairs office has alreadt started a dedicated programme of making Uganda as visible as possible at whatever fair there is around the world. Here, the point is to make as much noise as possible about Uganda.

Selling Ugandan cultural products, branding the missions, inviting groups and many such activities are already on schedule through the activities of PRESTO. Embassies have been required to get plasma TVs where they can run Ugandan short films. Especially videos shot by journalists, who are expected to know a lot about the country, would be required.

The journalists’’ role will be clear. Push the profile of the country through a concerted campaign. Uganda must do as other countries have done over the years. Shameless self-promotion is the name of the game.

Tourism employs less than 100,000 Ugandans yet it has the potential to employ many times that number. It shall be the job of the journalist to see that this statistic changes for the better.

Posted by Uganda Tourism Press Journalists at 3:18 AM 1 comment: